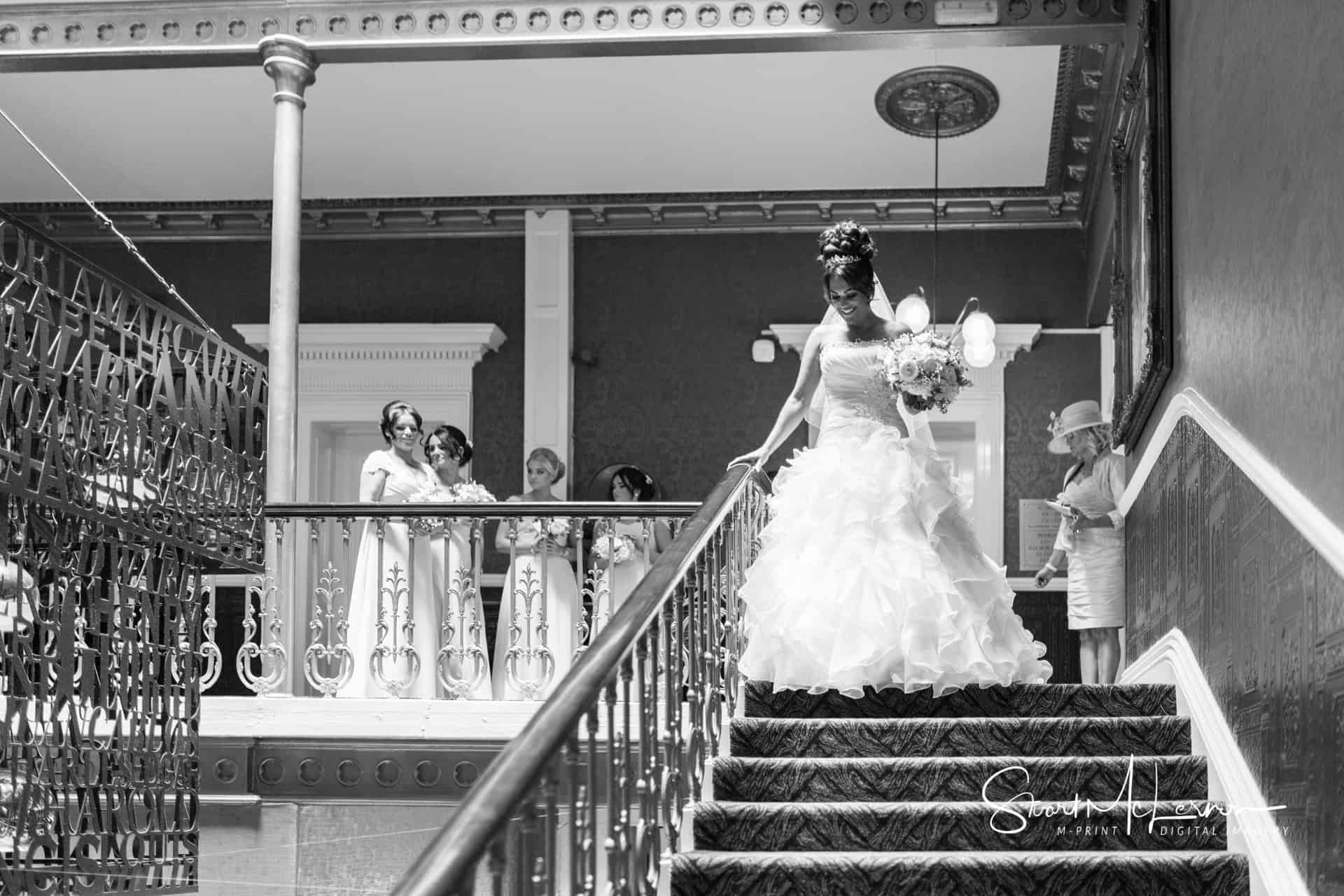 Seven bridesmaids… count them! Fortunately Dominic and Louise had chosen The Queen Hotel in Chester which boasts the decent sized Queen suite to accommodate the bride-to-be, make-up artists, videographer, bridesmaids and of course myself without us all falling over each other. There was a small balcony overlooking the magnificent Baltic Exchange Gardens which provided a place of quiet away from the hustle and bustle within. This was certainly to be a day with all the bells and whistles. We’d kept an eye on the weather as rain was looming on the day which threatened to spoil the horse-drawn carriage ride to All Saints Church. Fortunately there was only a brief shower which had cleared just in time!

I had arrived early at The Queen Hotel Chester with Rick my assistant, which had enabled us to get the all-important detail shots without feeling rushed and it’s also great for ‘breaking the ice’ with everyone in the room. It’s not easy being photographed by a stranger so I try to make myself into a friend before the main event starts. Soon enough the time came where everyone was dressed and ready to make the journey to the church. This is usually the point where the conversations amongst the bridesmaids dry up and the nerves take over. They made their way out of the suite and I was left with the bride for a few minutes to take some portraits. Then we emerged from the suite and headed towards the top of the Queen’s magnificent Victorian staircase with its ornate iron balustrade. It has to be seen to be believed.

Waiting at the bottom were Louise’s father and step-father – sure enough the tears began to flow as the emotion of the day overtook everyone. A few dabs of the hanky, a few deep breaths and Louise made her way into the horse-drawn carriage towards the church. All Saints is a large airy building which easily accommodated the 130 daytime guests and the service went, as they say, without a hitch. A quick mention at this point to Jean and John from Premier Video Productions who filmed the day, extending and receiving perfect professional courtesy – thank you. A carriage ride back to The Queen’s Hotel where it was time for the formals and the group shots before the wedding breakfast.

I’ve always described organising group shots as “like herding kittens” – frantic, chaotic, seemingly impossible as the above image of myself illustrates perfectly, but I’m pretty good at crowd control. Soon enough the “kittens” had all been “herded” into shape and we got some great group shots. Thankfully the task of Dominic and Louise’s romantic shots was easier. It was nice for them to spend a few minutes away from the guests to gather their thoughts and share their first private words as husband and wife. They made their way into the Collonades Ballroom Suite which has a chandelier as a centrepiece and a striking gold and navy blue colour scheme for their wedding breakfast.

Food and speeches done, the room was turned around for the evening celebrations with an extra 100 guests. Louise, who is a singer by trade, dropped in a surprise for her new husband Dominic by serenading him. Let me tell you this girl has got some pipes! She has a wonderful singing voice and the guests were captivated by her performance. The multi-tier cake cut with a ceremonial sword followed and the first dance had a theatrical quality. Louise then took to the stage with her singing partner which got the guests up and dancing on the floor. It was a very long day as a photographer but I have to say I enjoyed covering every minute of it. The Queens Hotel Chester is a great venue if you’re considering a Civil Service or celebration and I can’t wait to shoot here again!

If you are getting married and looking for a Queen Hotel Chester wedding photographer, please don’t hesitate to drop me a message…